Anne-Claire Fabre
I am a postdoctoral researcher interested in the origin and evolution of morphological and functional diversity of living vertebrates. I am currently working with Prof. Marcelo Sánchez at the Paläontologisches Institut und Museum in Zurich (Switzerland). I have recently been awarded a Marie-Skłodowska Curie Fellowship to go to work with Prof. Nadia Fröbisch at the Museum für Naturkunde, in Berlin (Germany) 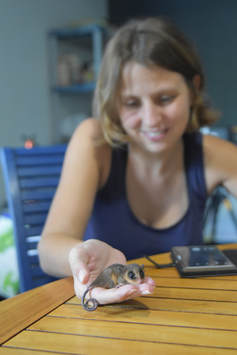 A Mouse Opossum and myself in the field in French Guiana (2018)
My research project entails research questions concerning evolutionary biology, principally focused on a functional morphological study of the skeleton. To do so I employ different types of 3D geometric morphometric and comparative approaches. I investigate the interrelationships between the musculoskeletal system (head, forelimb and hindlimb) in the context of locomotion (with a special focus on grasping behaviours) and life history traits (such as type of life cycle). In all my analyses I take into account the phylogenetic history of the species under study to better understand the effect of shared ancestry in explaining the observed ecomorphological patterns. In the context of my research, I am using integrative approaches allowing me to quantify 1) anatomy, 2) function 3) behaviour and 4) life history in an explicit evolutionary context using a tetrapod as model system (frogs, lizards, snakes, birds and mammals).


My research is integrative and at the interface of these approaches: 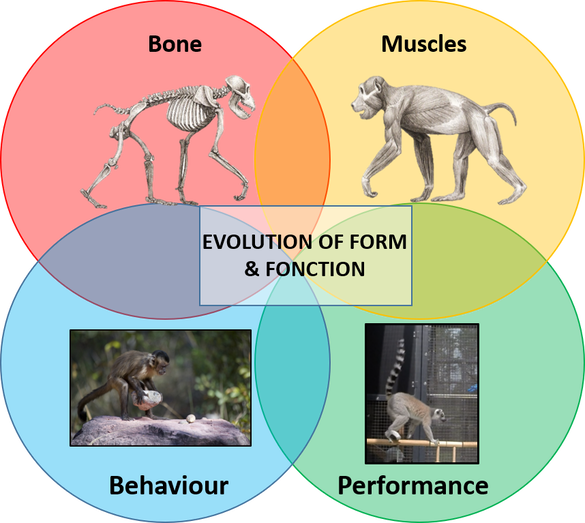 The methods that I use are:

Morphological methods going from linear measurements to high dimensional geometric morphometrics in order to quantify the shape of a structure (such as a bone):

Quantitative dissection in order to estimate the strength of a muscle or group of muscles and to study their interplay with bones in relation to function and behaviour.

Quantification of function using performance traits such as locomotor forces, bite forces, grip forces... These kinds of data are primordial to understand the interplay between the muskuloskeletal system and function.

Quantification of the behaviour of animals during different tasks (grasping strategies during locomotion, feeding...) in order to better understand the interplay between the muskulosketal system, function and behaviour.

Recently, I have initiated a project investigating the impact of developmental strategy on head shape in adult salamanders. More precisely, I am testing the impact of metamorphosis on the origin of phenotypic diversity in salamanders. This involved quantifying skull shape modularity and evolution across salamanders (Fabre et al. 2020) and I am now extending it to both the feeding and locomotor systems as well as the functional diversity during ontogeny.

A. Life cycle diversity in salamanders. B. Cranial change during ontogeny in Desmognathus marmoratus

Other examples of some research projects that I was PI on:
The grasping hand is one of the key morphological hallmarks of human evolution. Our understanding of the human grasping hand is largely built on our interpretation of the specialized lemur grasping hand (e.g., the presence of nails instead of claws on most primate species and skeletal evidence for the presence of manipulative capabilities in early primates utilizing the fine branch milieu). Yet, a holistic approach including the whole forelimb and its behavioral context in grasping and manipulation is currently missing. The scientific benefit of this project is that it will be the first study that will link grasping and manipulation ability related to the shape of the forelimb in a broad phylogenetic context in lemurs. The data obtained will greatly extend our understanding of the evolution of forelimb morphology in primates in relation to grasping and manipulation behavior. This quantitative and novel approach will then allow us to infer the grasping behavior of fossil species in a quantitative and objective way, thus opening up exciting new avenues of research into our understanding of primate evolution focusing initially on lemurs and further on tetrapods. 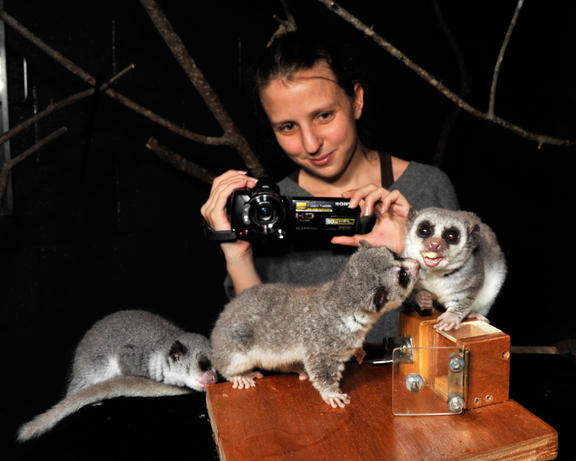 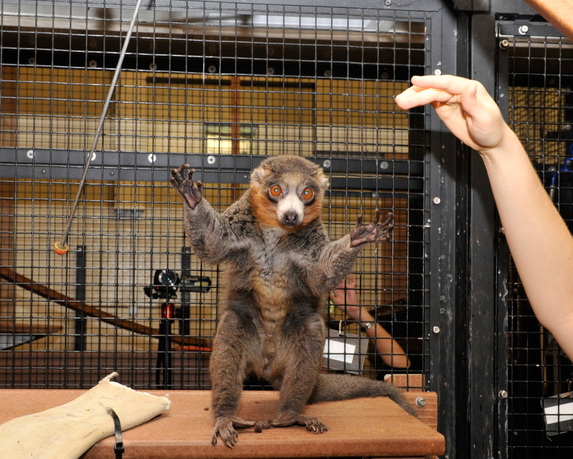 Mobile food trial with Julio, an Eulemur mongoz . Pendulum was designed by David Brewer (Photo credit: David Haring)
Part of my research was conducted at the Duke Lemur Center, funded by the Fyssen Foundation and a Marie-Skłodowska Curie fellowship: